And now for something completely different...Equality in Science 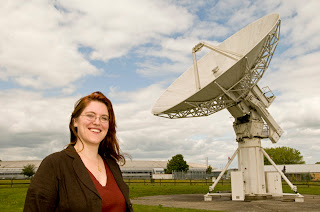 In the midst of this week's haze of grant-proposal writing, I took a day out to attend the "Equality for Women in Science - Sometime, now, NEVER?" conference happening at the International Space Innovation Centre, at Harwell Oxford, as it was conveniently located just across the road from my office. I also went, wearing my hat as chair of the RAL Women in STEM committee. (That's me in the above photo, by the way - taken for a brochure about women scientists in STFC.)

Slightly depressingly, as you'd expect for a conference on equality, it was a female dominated event, with about 12 men in the 100 strong audience. (Coincidentally, that's about the same proportion as women in STEM in STFC). So I had a certain feeling of there being a bit of preaching to the choir going on, but still.

We started with a keynote from John Perkins, Chief Scientific Advisor for BIS. He was really pushing the point that the leaky pipeline damages the UK economy, to the tune of millions, and that we needed to fix it.

We then had Jocelyn Bell-Burnell reporting on a Royal Society of Edinburgh study which is due to be launched on the 4th April, and so we got a sneak preview, which was confidential. She did set the scene quite nicely with some quotes from the Good Wife's Guide, 1955.

Paul Walton (University of York) presented some really interesting stats showing that the ability of women to progress through the system hasn't changed, and this extends across all disciplines. Scarily, if this trend continues, it'll take until 2109 to reach parity in civil engineering, and maybe never in clinical dentistry. The Chemistry department at York are the only department to receive an Athena SWAN gold award, and Paul told us the 12 year story of how they got there. It took a lot of leadership, he said, to change the culture. And they focussed on fairness, which is something everyone can get behind. (He also had a really neat optical illusion trick to make you see a colour photo when it was really black and white - illustrating the prejudices that we all have.)

Ottoline Leyser talked about the pressure cooker of academia - the publish or perish mantra that scares women away, and scares men into staying (because they don't want to seem a wimp), which is bad for everyone. She too was pushing the whole "parenting is a parent's issue" and "it's a culture in science issue, not a women in science issue", which I really agree with!

The last presentation was Denis Bartholomew, who was proposing the use of quotas to get more women on boards and in higher positions of authority. This didn't go down particularly well, for me I felt that he needed more evidence to show to support his thinking, especially when presenting to scientists! Still, he had a good analogy, that smoking only really became socially unacceptable after legislation came into force for the smoking ban.

After lunch we had some really good discussion sessions. Which I will report another time, because it's Friday afternoon, and time for me to go home!